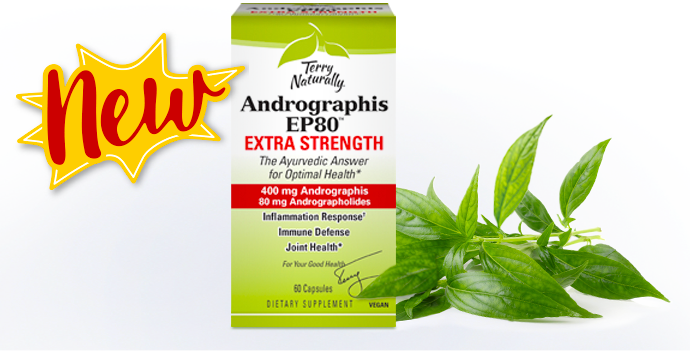 EuroPharma, Inc.®, maker of the Terry Naturally® brand of dietary supplements, announced today the launch of Andrographis EP80™ Extra Strength, an exclusive proprietary blend of two unique andrographis extracts for optimal health benefits. While the product is standardized to deliver a clinically studied dose of one of the key compounds, called andrographolides, it is a full spectrum blend of separate extracts, one from the leaf, and the other from the stem of the plant, for a greater diversity of phytonutrients that work synergistically with andrographolides as well.

Andrographis (Andrographis paniculata) has a rich history of use in the two oldest, continuous systems of medicine in the world, Ayurveda and Traditional Chinese Medicine (TCM), where it has been valued as a powerful adaptogen that provides a broad spectrum of health benefits. Andrographis research has been expanding dramatically, with over 800 studies listed on the electronic database of the National Institutes of Health (NIH) Institutes of Medicine, PubMed (www.PubMed.gov) on health topics ranging from immune system support, healthy inflammation response, cholesterol balance,  joint health, digestive activity, and cognitive function, to name a few.

“Adaptogens are rare botanicals that work at such a basic and profound level in the body that they can provide a multitude of health benefits. Andrographis is one of the most powerful adaptogens ever studied, and though it is perhaps best known as an immune herb, it can provide support for so much more. This botanical has been shown to improve energy, adaptability, brain function and mental clarity, and upper respiratory health. Andrographis EP80 is a whole health tool kit, rolled into one formula,” states Terry Lemerond, president and founder of EuroPharma, Inc., maker of the Terry Naturally line of dietary supplements.

“In order to capture the most important beneficial components of this botanical, we worked to create a blend of two substantially different andrographis extracts, one from the leaf, and one from the stem. While our formula provides 80 mg of andropholides, the two extracts also provide additional concentrated phytonutrients that can have an immense impact on good health. We then blended these extracts in a proprietary ratio, exclusive to EuroPharma, to create a unique formula, EP80, which has subsequently been selected by European researchers for use in scientific studies to further illuminate its activity.”


EuroPharma, Inc., maker of the Terry Naturally® brand, offers clinically proven and effective nutritional supplements that improve the health of America. Terry Lemerond, founder and president of EuroPharma, is well-known for innovation, and is credited as the first to introduce glucosamine sulfate and standardized Ginkgo biloba to the U.S. natural products market. The full line of Terry Naturally products is available throughout the U.S. in both the health food store and professional distribution channels. At EuroPharma, Our Passion is Your Health®.